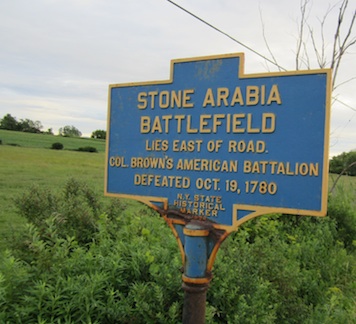 On October 19, 1780 Sir John Johnson led an army of 900 Loyalist and British Regulars on an invasion of the Mohawk Valley. After following a circuitous route across southern New York State they swept north up the Schoharie Valley entering the Mohawk Valley at Fort Hunter where the army turned west towards the Canajohary/Palatine Districts. The invaders camped the evening of October 18th near the Noses, a geological feature which forms the great divide in the Appalachian Mountain chain. The following day they crossed the Mohawk River at Keator’s Rift and burned Jellis Fonda’s mill before continuing on to attack the settlement of Stone Arabia located a mile and half north of the Mohawk River in the Palatine District. Colonel John Brown of the Massachusetts’s Militia marched his 380 militiamen out of Fort Paris to meet the enemy on a field about a mile from the fort. Outnumbered nearly 3 to 1 he was shot from his horse and his men fled the field. Stone Arabia was completely destroyed by the enemy including the twin Dutch Reformed and German Lutheran Churches. Both churches were rebuilt after the war ended and still stand today. The Battlefield is marked with a NYS historical marker sign. Further interpretation of the Battle of Stone Arabia can be seen at the Fort Plain Museum.