The Mohawk Valley Path Through History begins with the Revolutionary War - the sites and events related to this period in history.

At sunrise on Saturday, February 8th, 1783 400 men on 120 horse drawn sleighs trekked out of Fort Rensselaer bound for Fort Herkimer, the first stop on their mission to Lake Ontario. They paused at the fort only long enough to pick up additional supplies and be joined by another 100 men who had marched in directly from Saratoga bringing the total compliment to 500. Willett took the opportunity to pen a quick letter to Washington letting him know that the mission was at last underway and alerting him to the possibility of civil prosecution for the illegal impressments of sleighs. Washington responded with a backdated warrant to satisfy any local authorities that might complain.

Participating in the mission was the combined 1st and 2nd Rhode Island Regiments commanded by Lt. Colonel Jeremiah Olney. Olney’s regiment was a mixture of whites, African-Americans and other ethnic groups. The battle-hardened regiment had taken part in just about every major campaign. In the army’s darkest hour Olney’s troops had crossed the Delaware with Washington to seize Trenton. They were at Princeton, Brandywine, Monmouth and Yorktown and were considered to be among his most reliable units. Washington had transferred the regiment to Albany for the winter under the pretense that they were there to help guard the outposts around Albany, Schenectady and Saratoga but to keep one regiment together in reserve.

Willett had soon found the sleighs to be an encumbrance on the long march west. After ferrying the troops across the ice of Oneida Lake he left the sleighs on the shoreline and the men now continued on foot. They followed the river for a little more than a day’s march, staying just inside the woods for cover until arriving at the Oswego Falls. The assault force was now about twelve miles from their target. They soon paused just long enough to make ladders, which they would need to breach the walls of the fort. At eight o’clock in the evening Willett ordered the force to move forward. They cautiously left the woods moving onto the ice about three miles below the falls. When the column got to within four miles of their objective the ice on the river began to fail. Again Willett directed his men back into the woods, their three Oneida Indian guides leading the way. According to Willett Captain John was the most capable of the trio and the two others had uniformly yielded to his expertise throughout the journey. The guide now led the expedition through the woods expecting to come upon a logging road used for bringing firewood to the fort.  It was eleven pm and Captain John expected to reach the road by midnight which would bring the assault force to within two miles to the fort. The men were now moving well toward their objective on what was thought to be the last four miles. They were all in high spirits and found that the deep snow actually facilitated the transport of the ladders which would soon be needed to scale the walls of the fort. Then things began to go awry.

Source: Taken from the soon-to-be published "George Washington and the Mohawk Frontier" by Norman J. Bollen

The Fort Plain Museum and Historical Park marks the site of Fort Plain/Rensselaer, a Revolutionary War fortress built in 1779 to protect local residents from Valley raids and evacuees from Cherry Vall...More... 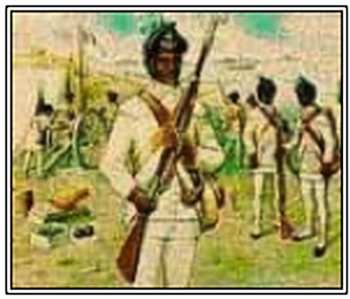