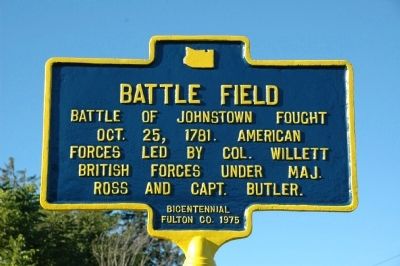 Considered the last battle of the Northern theatre of the Revolutionary War, the Battle of Johnstown, Oct. 25, 1781, was led by Patriot Colonel Marinus Willett. Willet and his men defeated British forces under Major Ross and Captain Butler, sending them into flight, retreating to the north. Willett's victory at Johnstown occurred at about the same time word reached the Mohawk Valley region of Gen. Cornwallis' surrender to George Washington at Yorktown-Oct. 19, 1781. Further interpretation of the Battle at Johnstown can be found at Johnson Hall State Historic Site and Fort Plain Museum and Historic Park.