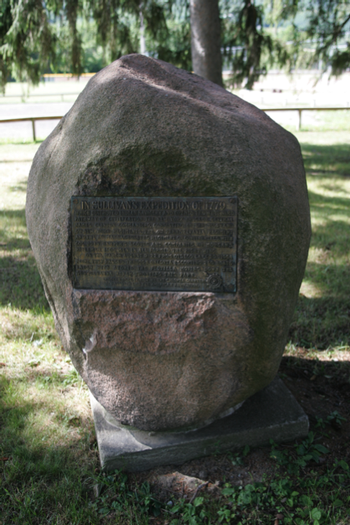 “ In Sullivan's Expedition of 1779... which destroyed Indian Savagery and opened the westward pathway of civilization the New York Brigade, General James Clinton commanding, consisting of the 3rd, 4th and 5th New York Regiments, the Pennsylvania Regiment and the 8th Massachusetts Regiment of Continentals, with Col. John Harper’s Scouts and companies of Morgan’s Riflemen, 1500 men in all formed the right wing. On the March August 9-22, from Otsego Lake to Tioga Point they passes through Oneonta escorting 250 boats laden with stores. The flotilla moving down the Susquehanna River fronting this park.” Men not in boats were reported to have been marching on both sides of the River.