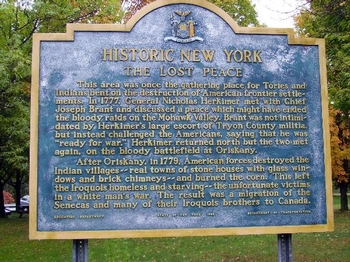 This area was once the gathering place for Tories and Indians bent on the destruction of American frontier settlements. In 1777, General Nicholas Herkimer met with Chief Joseph Brant and discussed a peace which might have ended the bloody raids on the Mohawk Valley. Brant was not intimidated by Herkimer's large escort of Tyron County militia, but, instead, challenged the Americans, saying that he was "ready for war." Herkimer returned north, but the two met again on the bloody battlefield at Oriskany. After Oriskany, in 1779, American forces destroyed the Indian villages - real towns of stone houses with glass windows and brick chimneys - and burned the corn. This left the Iroquois homeless and starving - the unfortunate victims in a white man's war. The result was a migration of the Senecas and many of their Iroquois brothers to Canada. This site falls outside of Otsego County, on 1-88. Further information on this historic location can be found at the Roland B. Hill Museum, Otego.