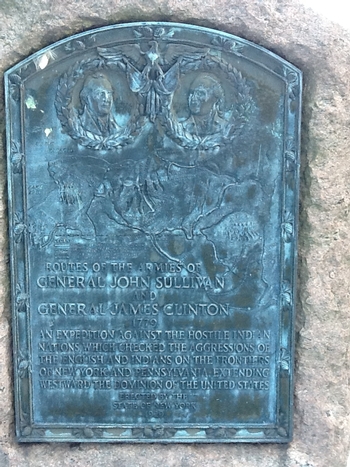 Site of the historic Iroquois village of Unadilla and marker of the Sullivan-Clinton Campaign route along the Susquehanna River south and west. Raids on old Unadilla and (nearby) Onaquaga occurred back and forth starting with Mohawk chief Joseph Brant's attack on old Unadilla in early 1777 making it a Tory stronghold and culminating in October 1778 when more than 250 men under the command of Lieutenant Colonel William Butler of the 4th Pennsylvania Regiment descended on the two towns (which had been abandoned because of their advance) and destroyed them, razing most of the buildings and taking or destroying provisions. The attacks were executed in retaliation for raids on frontier communities led by Brant and British Loyalists during the spring and summer of 1778. Marker reads: "Routes of the Armies of General John Sullivan and General James Clinton 1779. An expedition against the hostile Indian nations which checked the aggressions of English and Indians on the frontiers of New York and Pennsylvania, extending outward the dominion of the United States."