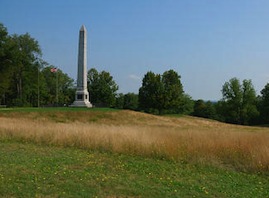 Considered the significant turning point in the American Revolution, the Battle of Oriskany, fought on August 6, 1777, has been described as one of the bloodiest battles of the War of Independence. In August 1777, while the British were attacking Fort Stanwix, Brigadier General Nicholas Herkimer assembled 800 militiamen, supported by 60 allied Oneida warriors, and marched from Fort Dayton to aid against the seige. Upon hearing of Herkimer's advance, British and Loyalist troops under Sir John Johnson and Col. John Butler, and Indian forces led by Mohawk Joseph Brant, set a trap in a boggy ravine west of Oriskany Creek. As the unsuspecting American troops crossed the swampy bottom and marched up the ravine, the British attacked. The patriots fought in brutal hand-to-hand combat, and in spite of heavy losses, caused the Seneca and the Mohawks, followed by the British and Loyalists to retreat. It was in this battle that General Herkimer received the wound to his leg which led to his death ten days later. A monument was dedicated on August 6, 1884, to serve as a memorial to those who fought. Oriskany Battlefied was designated a New York State historic site in 1927. In recognition of the site's exceptional historic value, the battlefield was designated a National Historic Landmark in 1963. Today, visitors to the battlefield can walk the site, read a series of interpretive signs, and visit a historic encampment during special events.