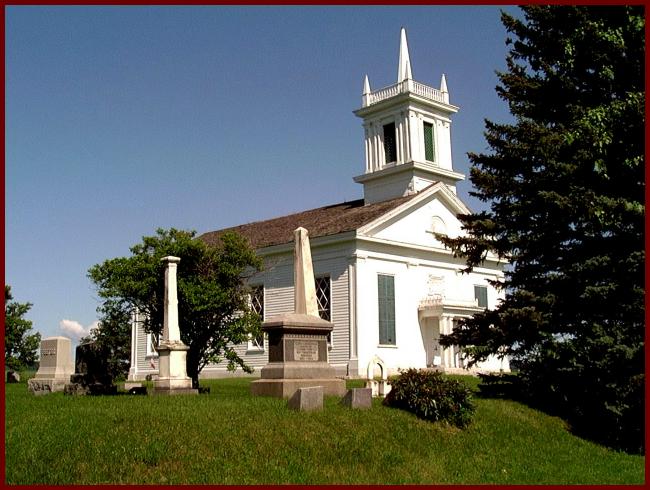 The Snells Bush church was built by the Palatines on a piece of land donated by the Snell family. Originally the land was given to Jacob Zimmerman and Johan Jost Snell, by a land grant given to them from King Hendrick the Mohawk (Chief) Great Sachem in 1755 in honor of his daughter Anna Margaretha who married Jacob Zimmerman. The four sons of Johan Jost Snell decided to donate 7 acres to build a church and school. It was placed on the highest point of the hill overlooking the Mohawk valley. There were three churches built on the site. It was the first church on the north side of the river. The first church was a log church which was built before the Revolutionary War and it was burned by the Indians during the Revolutionary War. "It was said that the land for the church was cleared by the settlers on a Saturday afternoon and probably built to similar log structure of the day -", quoted from a book entitled "Young'un" by Herbert Best. This was called the rolling up of a meeting house. After the war another church was built on the same site. There was a problem on getting ministers, and Snells Bush church became a church under the St. John's Reformed church in St Johnsville and Reformed church of Stone Arabia sharing ministers. Snells Bush church was a German Reformed church, not German Lutheran or Dutch Reformed Church.. There was problem getting clergy so the Synod and Dutch Reformed Classis (from Holland) took over the overseeing of the church and they called the church St. Paul's Dutch Reformed Church. They serviced the Snells Bush church as well as other small churches because it was so hard to get ministers and sometimes the clergy would preach more than one service a day (sometimes 5 services in Dutch, English and German). That's why today we have a problem explaining that Snell Bush Church is German not Dutch. Of course everyone was invited to come to services whoever they were. (including Dutch and also Indians. There were seats for the Indians in the back of the church). In 1850 the third church was built to replace the old one. The original timber from the 2nd church was used in the new church. During the Revolutionary War the church was used to send signals on troops movements though the valley to Herkimer on the other side of the river. It was these messages that Molly Brant intercepted and went to tell her brother Joseph Brant for the massacre at the Battle of Oriskany. The church is now open only for weddings and for the family reunion, held each year on the first Sunday in August. The church is on the National & State Historic Sites registry list. (*Taken from Sarah Timmerman Israel's entry on http://herkimer.nygenweb.net/)